Today, Easter Saturday, was the day for our regular - once every 5 weeks -
coffee ride starting in Mt Roskill.

This ride uses many pathways with a variety of bridges on them, so we decided
to feature them on this page.

The first one is the rather grand bridge crossing the soon-to-be-opened South Western
Motorway extension.  It has a great spiral approach. 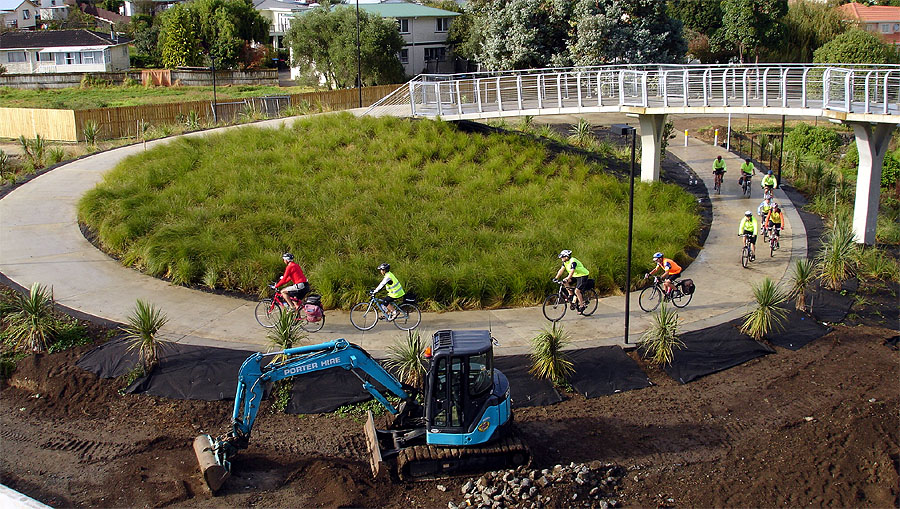 The next is somewhat less grand : in fact, it's quite utilitarian.
This is in the  War Memorial Park in Wesley.

Walsmley Park is the next park. The Auckland City Council relatively recently
completed a nice 2m wide pathway through here. It includes this bridge which has a nice "S" bend.
At this stage we were watching the rather ominous clouds building up in front of us. 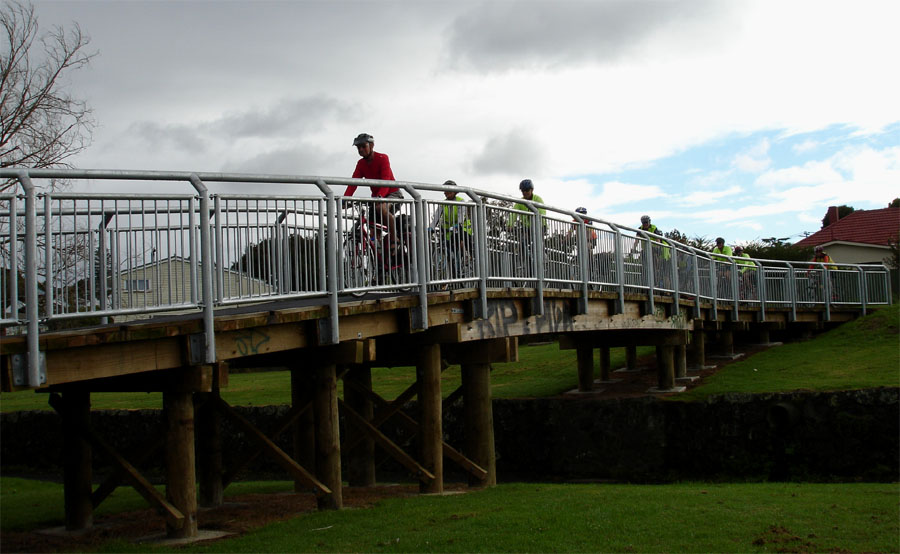 It rained, but the rain stopped by the time we reached the excellent path alongside
the Henderson Creek, where we found the following two bridges. 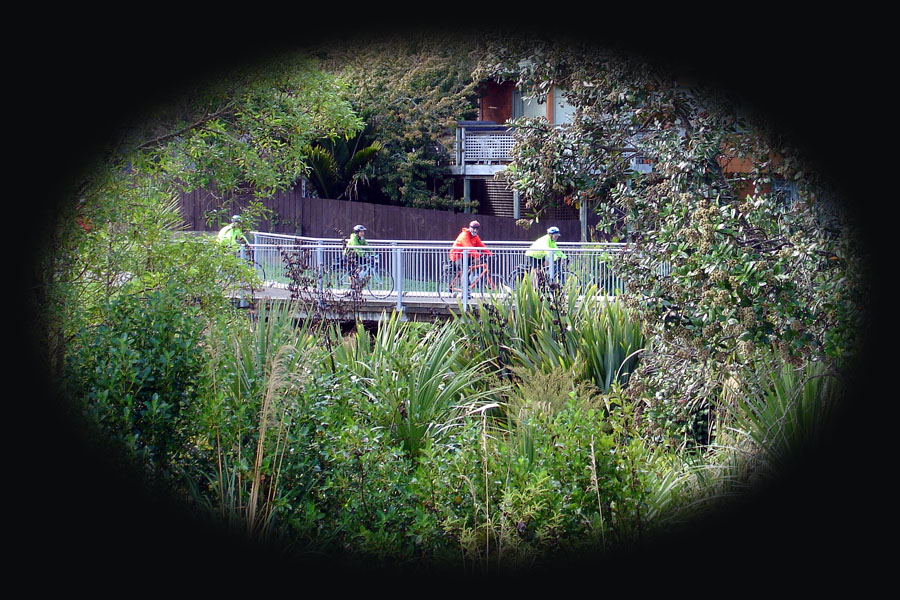 Then it was on to the clip-under taking us below Central Park Drive. 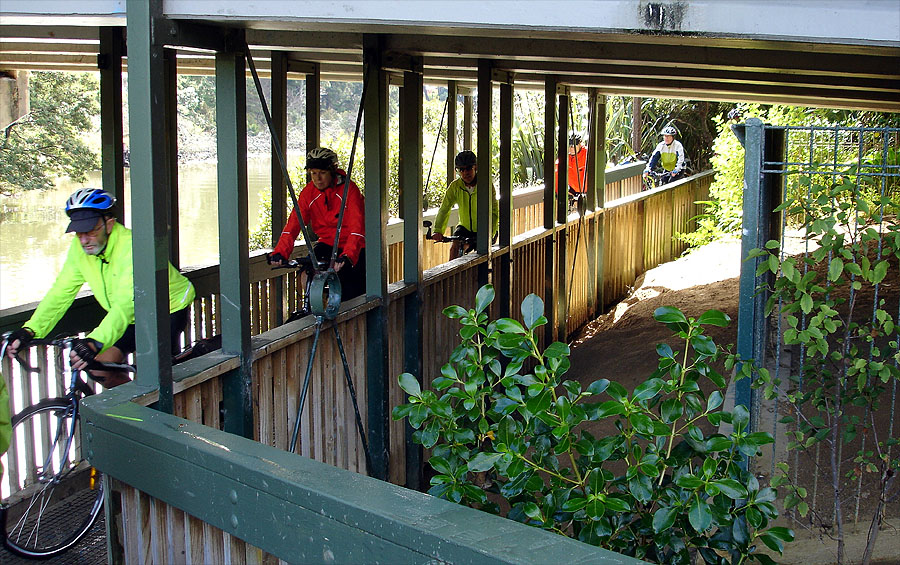 The riders were probably far too busy, navigating the narrow bridge, to  have

had time to glance to their right and see this little waterfall on the
opposite bank of the Henderson Creek. 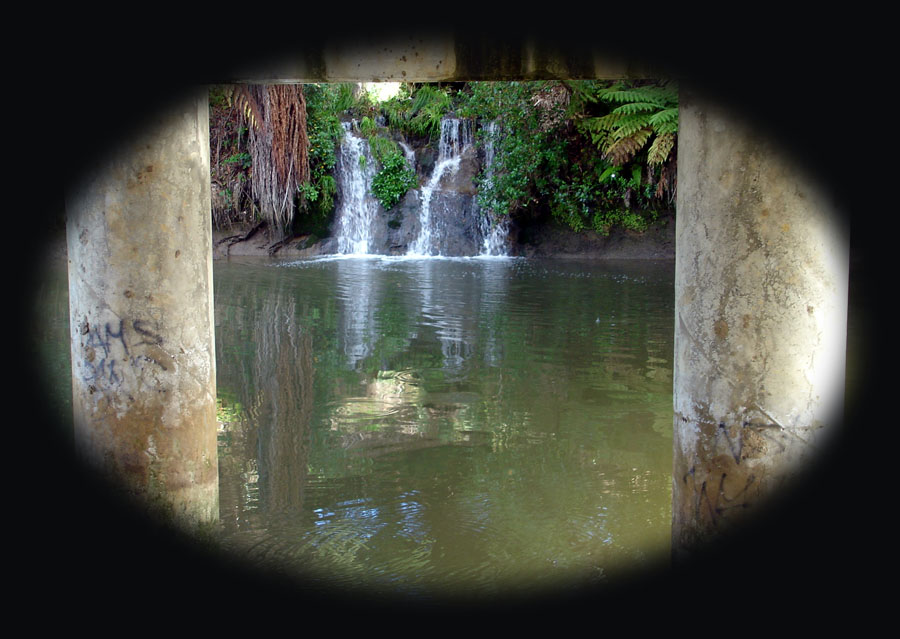 Once we had received our caffeine shots we headed back towards the city.
This was the first of the North Western Motorway cycle path clip-ons,
crossing the Henderson Creek.  Note the rubber matting the bikes are riding on.
It causes a most uncanny steering feeling : somewhat similar to having a flat. 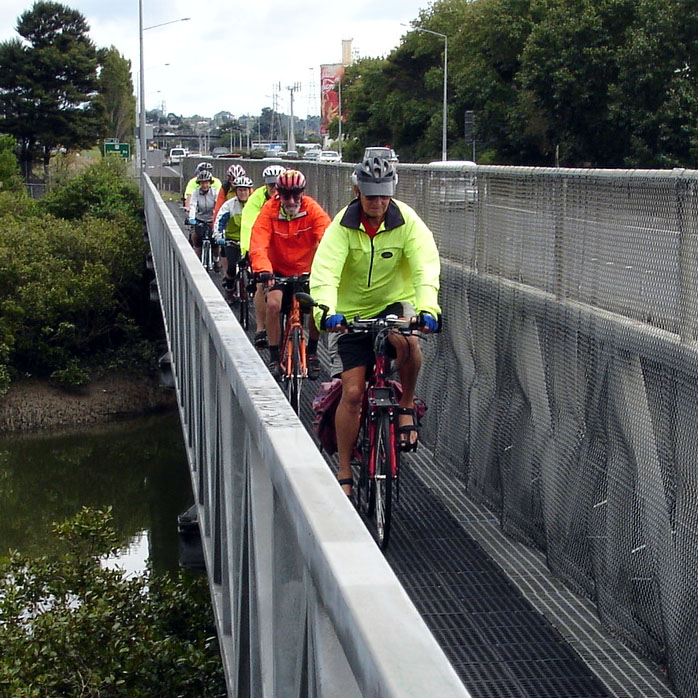 The second clip-on is quite long, and quite narrow.
It crosses the Whau River. 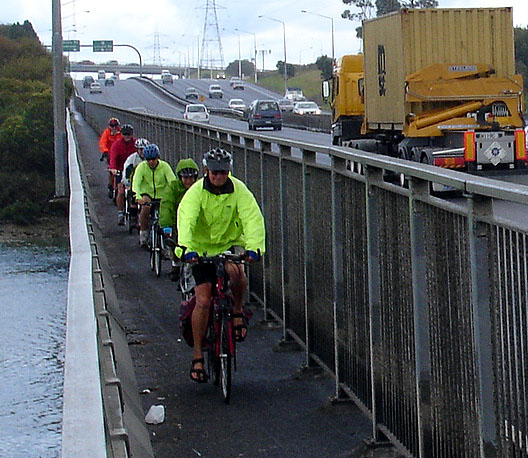 The bike bridge crosses the Patiki Road on-ramp and goes under the off-ramp. 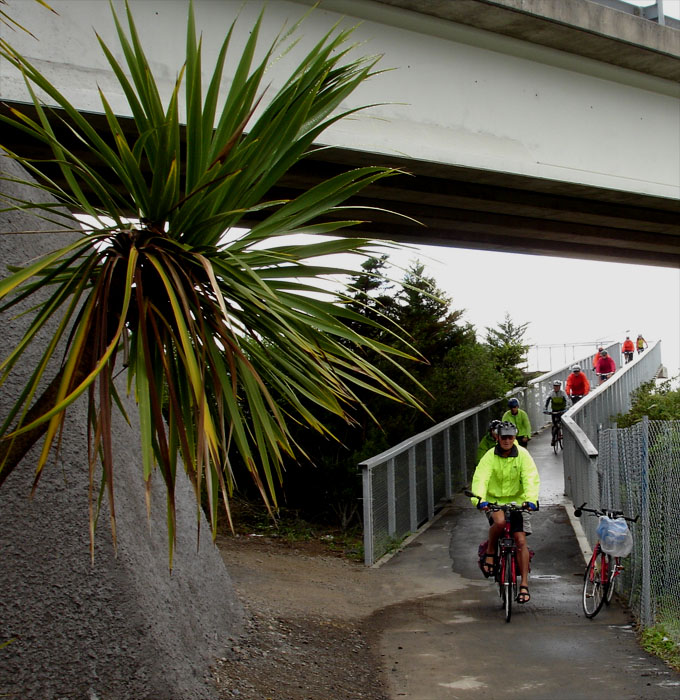 This litlle juddery beauty, with its "S" bend, runs under the Rosebank Road off-ramp.
It is the site of several bike prangs, and numerous close calls, because many
lycra-clads barrel round the bend - which, as you can see, offers limited visibility -
far too fast.  Often the prangs end up with someone in the mangrove swamp. 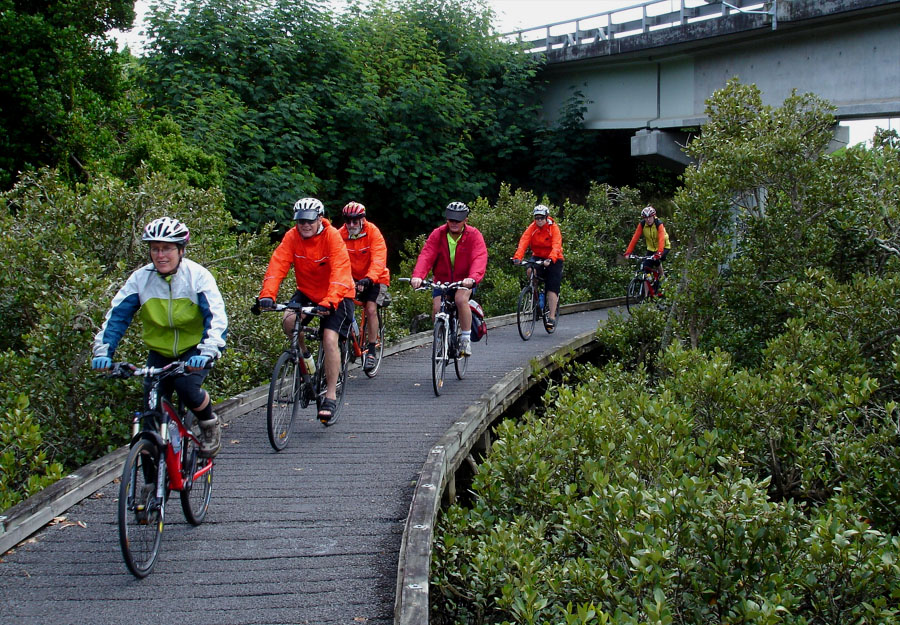 OK  -   there's no bridge here.  But the group looked worthy of a photo anyway
as they rode alongside the NW Motorway. 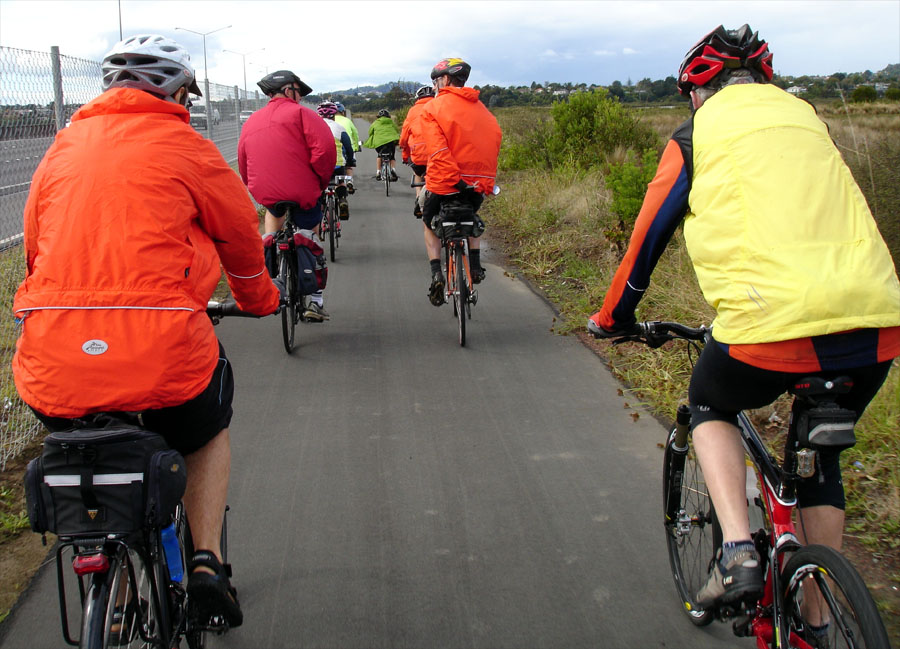 The last of the clip-ons, nearing Point Chevalier.
This one is relatively wide - you can actually pass someone coming the other way -
and it has a decent concrete surface to ride on. 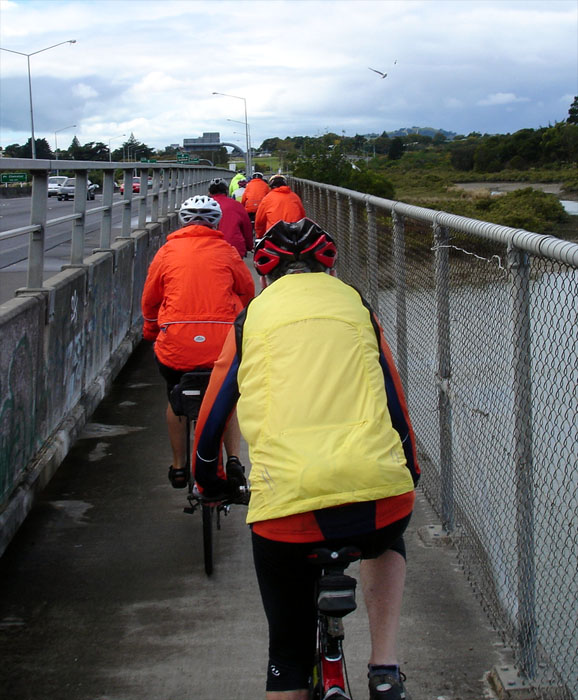 Then it's up and over the Great North Road at Carrington........ 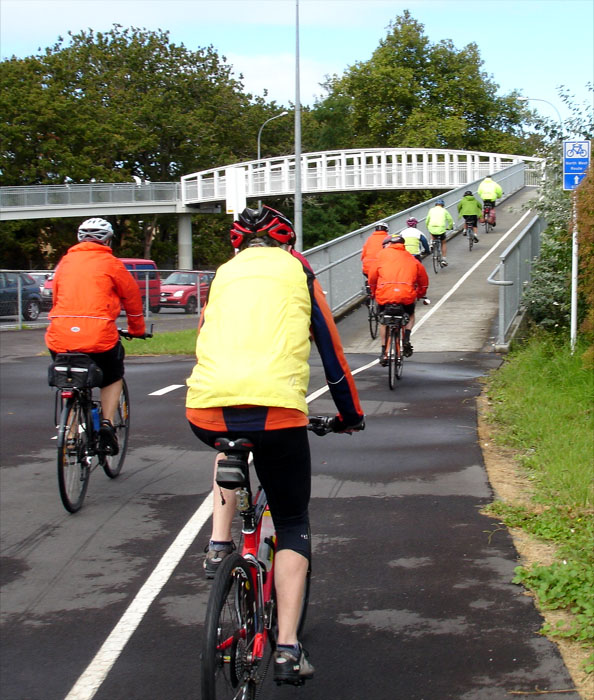 .....and down the other side.
The path below the bridge is the cycle path heading towards Avondale.

Our last bridge - more an elevated path - runs round the Mt Albert Grammar School
boundary toward Kerr-Taylor Reserve.      It is about 600m long. 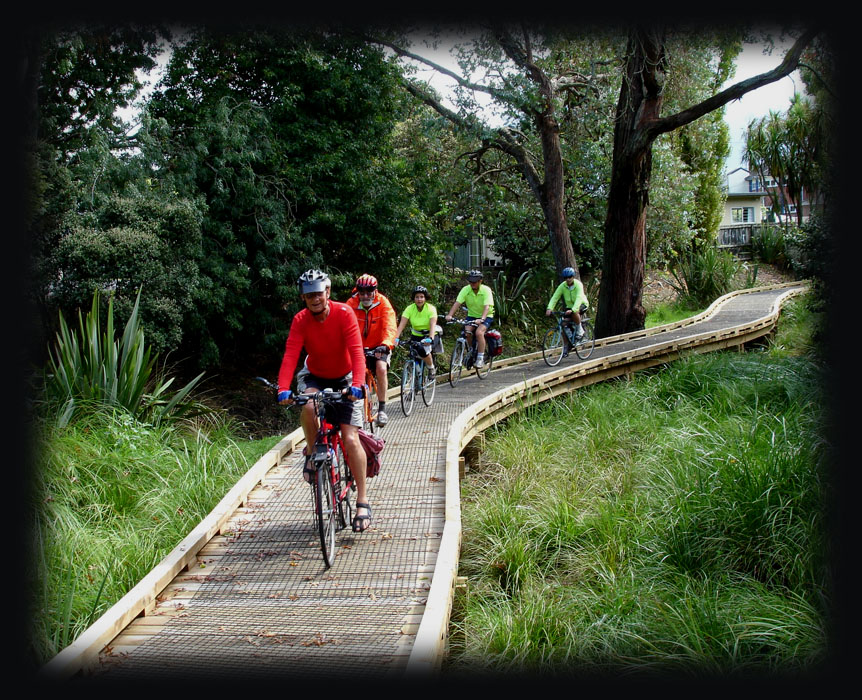 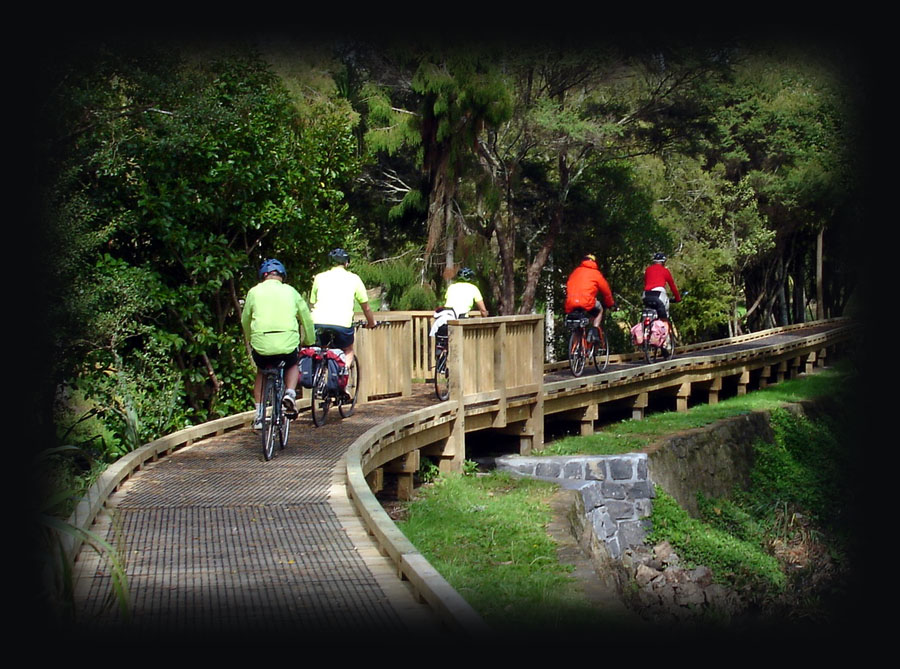 And that was the end of our bridges for the day.

Perhaps it's time you got back to work -
but only if you have finished looking at ACTA's web pages.